Between April 7 and May 12, Indians voted in the general election for a new Prime Minister. And boy did they rock it. Mosh pit, punk concert, early 90’s, rock it. The world’s largest democratic election in the history of time brought 66.38% of the over 814 million registered voters to the polls for a total of 563 million votes cast! There were over 700,000 polling stations established to accommodate votes throughout India. These numbers are staggering on many levels.

For comparison- the United States had 222 million eligible voters out of a total of 241 million residents of voting age in the 2012 presidential elections. 58.7% of registered voters, or 130 million people cast a vote at the polls on election day. The only data I could find on US polling place numbers dates from 2004: we rang in at 113,754. 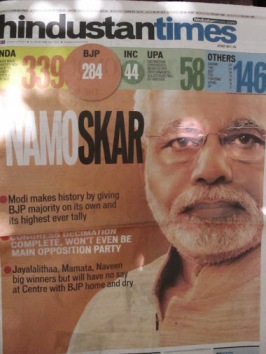 The results are in: Modi wins.

It’s been amazing to watch the democratic process in India. Over the past month plus, I saw the power of the political machine at work. Instead of incessant radio and tv ads, I saw billboards and heard the blaring speakers on the roaming “Modi-mobile” (as I call it). Essentially, a car decked out in Modi paraphernalia with an absurdly loud speaker system that drives the main city streets (and rural byways) blasting information and music about why one should vote for Narendra Modi.

Everyone had an opinion about the upcoming elections. They spoke of the status of the long-standing Congress party and its current stigma as a party rife with corruption. They spoke of a stagnant economy and lacking infrastructure. They spoke of a need for change. Post-election, when the results came in, people expressed hope in the democratic process. “If Modi can’t fix things, we will vote him out. But he deserves the chance to try” was the common theme. The Daily Show coverage of the election was quite good and they too noticed the populace highly engaged in the political process.

Voting was staggered across the country, state by state (there are 29 states in India), to ensure law and order. I arrived at 6AM in Dehradun, the capital of Uttarhand state, on their states’ election day. Little did I know that many cities shut down on election day. (Why do we not do this in America??!) Rickshaw drivers are ordered on “election duty” to literally help drive voters to the polls, restaurants are closed, and people are ordered not to congregate in large groups. But the excitement was palpable. Many men wore caps donning their party logo, and despite the law, were mostly found in groups chatting excitably. 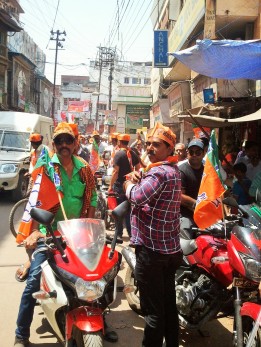 A few weeks later, we were fortunate enough to be in Varanasi (the holiest and one of the oldest living cities in the world) when the election results were announced on May 16. Walking the streets on that hot and sticky night, they were abuzz with men and celebration. We got even luckier when the following day, Modi himself (the newly elected Prime Minister) made a special trip to Varanasi to attend the nightly Dashashwamedh Ghat ceremony on the Ganges. That day, we observed many impromptu Modi rallies, streets adorned with BJP flags and posters (the party of Modi), and general excitement as the city prepared for the new Prime Minister to arrive. As we stood on the shared balcony of our hotel overlooking the Ganges, lining the guardrail hoping for the impossible glimpse of Modi (he was at least a quarter mile away), we shared in the palpable excitement exuded by the thousands of Indian people that thronged the ghats. New prime minister, new party, new hope. (The main reason for his visit to Varanasi is perhaps best saved for another blog post. Read- hindu nationalism, religiosity, #makingastatement.) 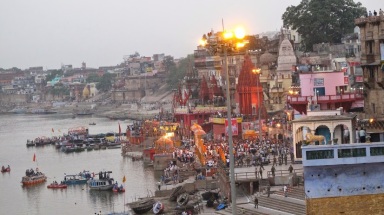 However, there are some reasons to be concerned with the new Modi election. If you’ve been reading the NY Times over the last year, you have probably seen one of the twenty or so articles on the India elections, blaming Modi for anti-Muslim riots in Gujarat, the state where he reigned as Chief Minister, in the early 2000’s. And the Times is not wrong to fearmonger. Under Modi’s tenure in Gujarat, rioting did kill thousands of Muslims and the US subsequently placed a ban on Modi’s Visa to the US. Modi’s political roots did begin with the R.S.S. party, a strong Hindu nationalist platform known for anti-Muslim and pro-Hindu rhetoric. And Modi is adept at fusing his reputation as strong businessman and ‘get ‘er doner’ with his image of being a “spiritual leader.” (More from the NYTimes: pre-election,  post-election.) 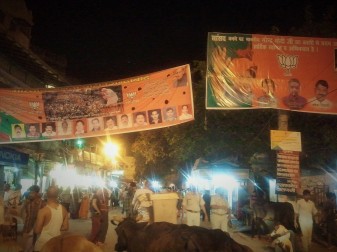 Election results are in!

However, the verdict is still out on Modi. He has been careful to let his Hindu nationalistic roots simmer in the background during his first few weeks in office. (Click to read more on the Modi 12-point governance plan.) He has received an open invitation to the White House. And (in my opinion), if he ran on a platform of economic and infrastructure improvement, igniting religious tension and inciting violence would (in theory) hinder such lofty goals. Only time will tell where Modi will take the country. Similar to the post-Obama excitement in 2008, hopes are exceedingly high. Reality may be another story.

(One more video from @TheDailyShow if you are interested! There are four in total!)

After a proper send off to the NOLS India team in Raniket, I caught an overnight train from Kothgodam to Haridwar-a city situated around the banks of the holy river Ganges. This most sacred river to Hindus is worshipped as the goddess Ganga and is the embodiment of all blessed waters in Hindu mythology. The Ganges represents purification and atonement, is referred to as “Mother Ganga” for her acceptance and forgiveness, and serves as the vehicle for ascent of the human form from earth to heaven. In sum- the Ganges is the be-all, end-all for Hindus in India.

In Haridwar, the Ganges enters the Indo-Gangetic plains of North India for the first time, so the water is fast moving, high volume, and has passed through fewer cities (read: less pollution than Varanasi). Haridwar is known as one of the seven holiest places in India based on the myth that it is one of the four locations where drops of the elixir of immortality were spilled. Specifically, the elixir was supposedly spilled at the current location of the Har-Ki-Pauri, “footsteps of the Lord,” the most sacred ghat (series of steps leading to a holy body of water) in the city. 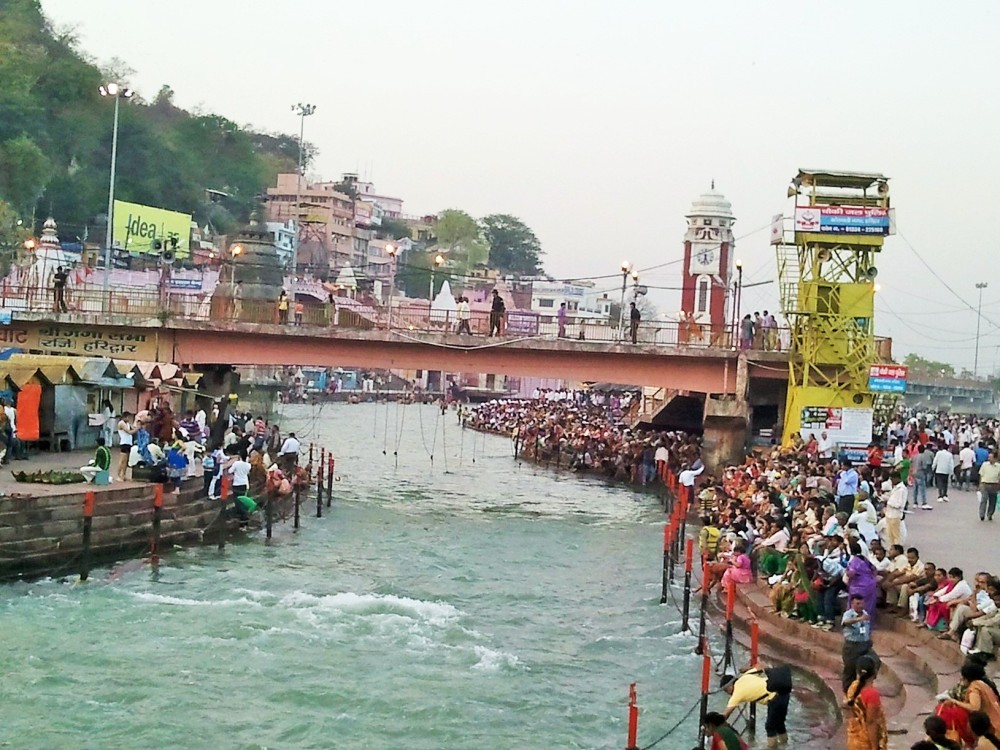 All this is to say- Haridwar is an Indian tourist destination, not a Western one. We encountered a handful of Western (read: white) tourists during our two days in the city. There is a flourishing tourist industry in Haridwar, but entirely Indian-centric. The streets were filled with vendors, most of which focused on Ganges paraphernalia- flowers and incense to send down the river, vessels for capturing some holy water for the mantle back home, etc. We ended up hiking about 4km to visit a Hindu temple at the top of a hill and were accompanied by hundreds of Indians sweating their way up the same pilgrimage.

On Sunday night, we headed down to the dusk ceremony at Har-Ki-Pauri along with thousands of Indians along the banks of the Ganges. It was hard to understand exactly what was happening, as the crowds were large and the ceremony unfamiliar, but many things were poured into the river, many things were lit on fire, and many photos were taken. While the rituals themselves escaped me, I felt a very authentic, spiritual awareness present in Haridwar. Indians had traveled from far distances to visit the local temples, bathe in the holy waters, and witness the Har-Ki-Pauri twice daily ceremony. It was very, uniquely Indian. 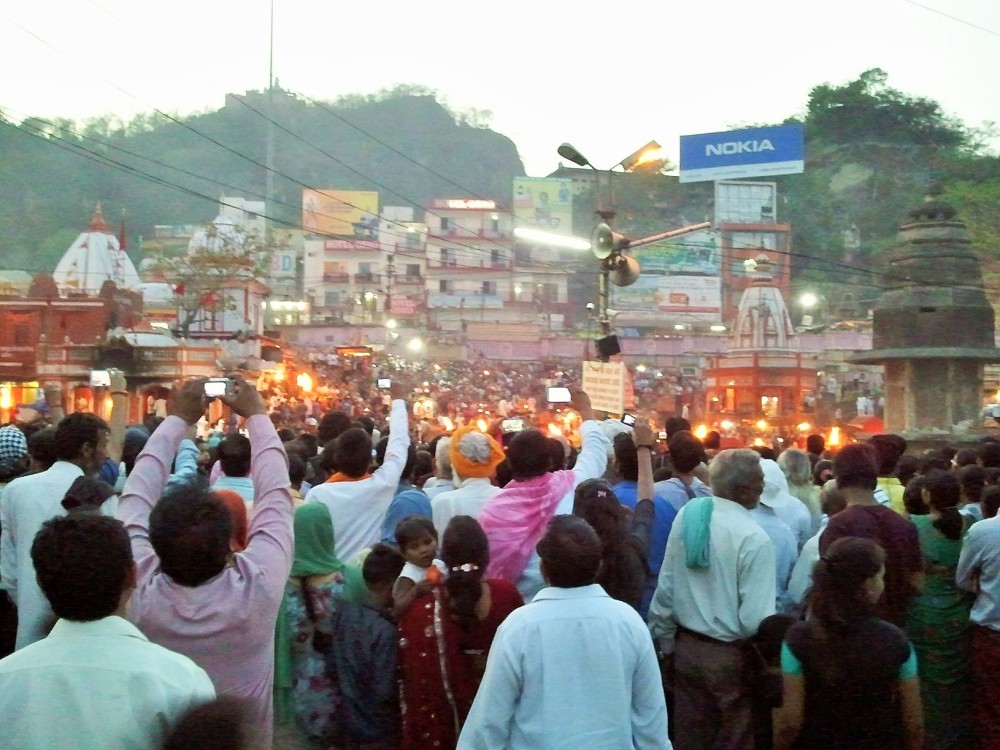 In contrast, our next stop on the tour was Rishikesh, another city located on the banks of the holy Ganges. Rishikesh is world-renown for a very non-Indian phenomena- namely the Beatles White Album, which they composed in a local ashram (read: yoga sanctuary) in the late sixties. While also a holy city, with numerous Hindu temples and hoards of Indian tourists, it exudes a different energy than that of Haridwar. Characterized by the overwhelming presence of Western-themed restaurants featuring a plethora of muesli (seriously, i’ve never seen an item so prevalent!), German cakes, and Italian offerings, and seemingly overrun with dreadlocks, Rishikesh stands in stark contrast to our other Ganges experience. 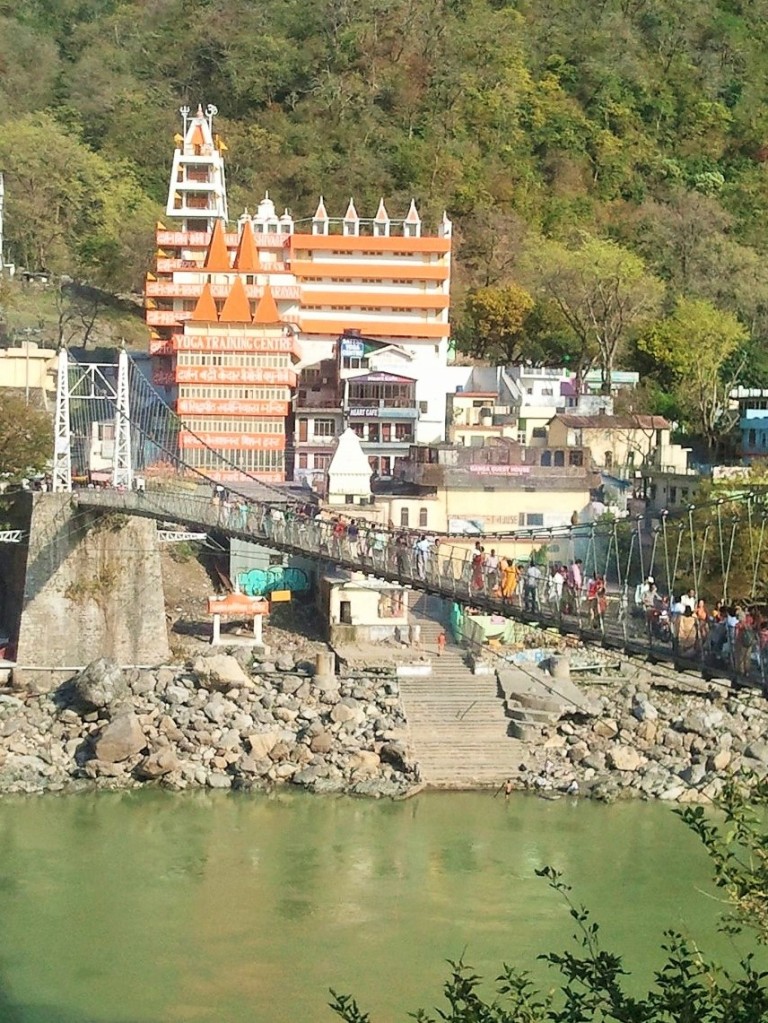 It goes without saying that Rishikesh was a very beautiful and “easy” place to reside and thus the concentration of westerners seems logical given the amenities of the locale. There are yoga studios on every corner and ashrams around every bend. The main contrast to Haridwar, was this obvious catering to Western interests. The Indian tourists seemed to venture onto the “Western banks” to visit temples or set up their white water raft down the Ganges (Yes- I rafted the Ganges, and it was really fun!), but there was much less a feeling of pilgrimage, religion, and ritual. Not necessarily a bad thing, just very different. 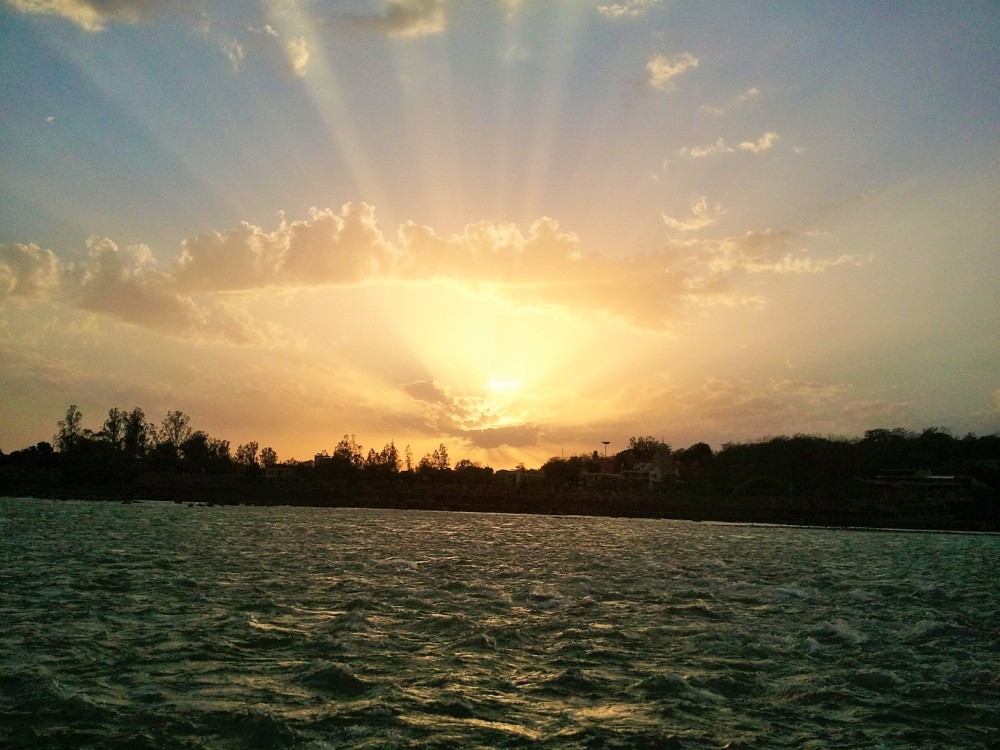 But the sunsets were spectacular, the beaches pristine, and the wifi plentiful.