Lest the readers of this blog think I spend all of my time pondering the state of the world, politics, injustice, and chicken, I thought I’d digress about an ever-present topic here in India: poop.

Shit is everywhere, literally. Because cows are revered in Hinduism, they have free reign to walk the streets of every major city, town, and thoroughfare. Depending on your location, an evening stroll can easily become a hazardous trek through a field of poop landmines. What’s even crazier is how you start analyzing the cow poop in the street. Thinking to yourself, ‘Uh oh, whoever laid that patty is not doing well’ or ‘Wow- that guy must have eaten a small child!’  Then of course there’s the dried shit-dust that results from the previously mentioned cow shit. Every day, your clothes, shoes, hair are covered in the shit-dust, not to mention the pounds of shit-dust that one must inevitably be inhaling during an average day of walking around India. (Disclaimer: While I swear I am not OCD, I cannot help but sometimes think about the amount of shit-dust Indians must inhale during their lifetime.) 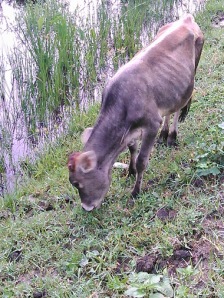 Next, of course, is the poop that comes out of your own body. I’d been relatively lucky on the explosive diarrhea front. Until we reached the state of Bihar. Then all bets were off. Now I just harbor some lingering liquid gold. I tell myself that constipated people would kill for this stool, but that doesn’t quite reassure me. I’ve learned all about wiping my ass with my hand using water (not as gross as it seems at first) and how having diarrhea actually makes wiping with water quite easy (like dissolves like)! Similar to my experience in Africa, diarrhea is actually easier to release over a squat toilet, but nothing beats pooping through the open hole in the train bathroom while you watch the tracks whip by and no one can hear your farts.

Finally, I have been lucky enough to have been pooped on by not one, but two different species of animals while here in India. The first was a sickly (and possibly dying) cow that was tied up outside of the hotel where we were staying in Varanasi. As Willy and I began to walk by the cow, it suddenly released some of its own liquid gold in a rapid fire squirt. I stupidly decided to make a run for it, but unfortunately I didn’t calculate for the back splatter that ricocheted off the ground and onto my clothes and arms. My second incident occurred yesterday in Darjeeling on the stoop of a hotel. This one was a direct hit to the top of my head and backpack. I was spared the humiliation of walking through the streets of town with pigeon shit dripping down my face thanks to my trusty baseball cap. Let’s just say- that pigeon is eating well these days!

So as I eagerly await my third shit attack, my next bout of anxiety about finding a bathroom at an inopportune time, and the continued inhalation of shit-dust (copyright Rula 2014) – I remind the readers that this is the good shit, so don’t be too jealous.